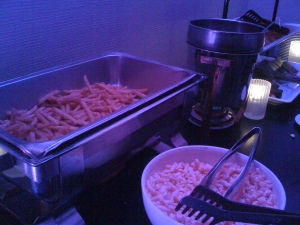 what better ingredients to have at a wedding dessert tray than:

you figure out the math.

this is what happens when it’s 1am and you’re tired after a gig and need some comfort food. 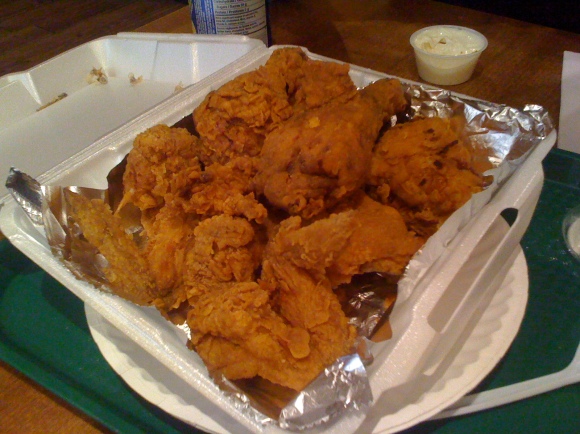 it’s when you stumble in 20mins before closing, the cashier is cleaning the counters, but, regardless they accommodate you and they literally give you all of the fried chicken they have, and tell you “i’ll make you a deal” that you know you’ve got something special. 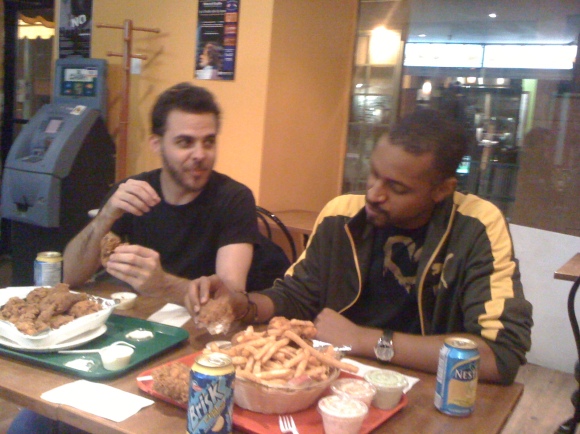 i didn’t have time to take pictures of all the food before christopher cargnello and fredy v started chowing down.  but what makes this additionally amazing is that the cashier claimed that there were “not enough” pieces of chicken left so she piled on a bunch of chicken nuggets on top of the fries.  wtf, goddamn.  we ate it all anyway.

Open from around noon till around 2am every day

– fries really not so great

previous to this location, access to grumman78’s special brand of taco-reimaginings was limited to either chance encounters or careful planning around their highly irregular schedule, consisting essentially of a mix of outdoor festival appearances, the occasional sporadic special event/party at their st-henri headquarters, and summer weekends at a location in the mile end from midnight-3am.

but the days of following a taco van around town are over.  or at least optional.

choosing the auspicious opening day of april 1st, 2012, grumman 78 has opening its “permanent” stationary location in what i would argue is the food heaven neighbourhood of montreal.  sometimes referred to as “chinatown west”, the area approximately west of crescent and east of atwater has a pretty ridiculous abundance of good eats, and from all types of ethnicities.  on top of this neighbourhood, their stall is located literally directly opposite the other legendary faubourg food court eatery, bangkok.

anyway fuck the background info, let’s look at the food. 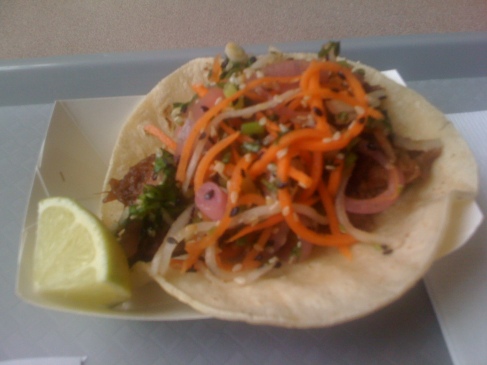 this is actually what i ordered and ate last- an extra taco because i am a fat bastard.  this was their most popular taco last summer, and for good reason.  mmmm. 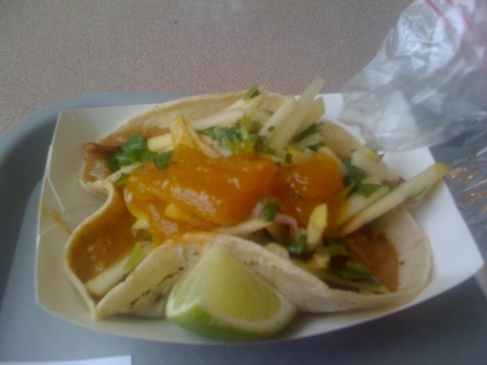 holy shit this was good.  and they did not skimp on the lamb.  definitely a hard time maintaining structural integrity with all the saucy goodness in there.  i should have included a hand for size estimation because the portion size is quite reasonable.

okay, so grumman serves their amazing fresh juice mixes in a bag, as a kind of novelty, and its neat and all, but somehow it is completely ridiculous when you’re in a food court and you’re getting water because your saving your hard-earned dollars for more tacos.  i suspect this water was wind-dried. 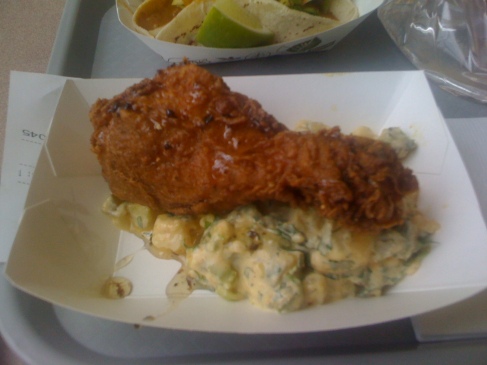 to me this exemplifies everything right and everything wrong with the faubourg grumman.  this is a single deep-fried drumstick on a bed of potato salad.  for $4.  $4!!!

now, in the past, when i’ve indulged in grumman, it has been by following their facebook updates and making a special trip to a festival location, or it’s been due to a special occasion party that they were throwing at their headquarters in st-henri.  in short, these have been unique occasions where i’ve been making the trek out for unique food.  furthermore, when you’re at a festival and a shitty bbqed hotdog is $6 and an awesome premium taco is $4, it’s a no-brainer.  but a food court?  people are used to paying less than $10 for a food court meal.  and at the faubourg, we’ve got the mighty bangkok literally right across from them.  so will this type of pricing work in a food court?  we’re talking $20 to feel full here.  i’m not knocking grumman’s quality at all- i’m just concerned that they will not succeed in this setting.

so, back to the deepfried chicken drumstick.  wtf.  $4 for a tiny drumstick, wtf.

and then i took a bite of it.

seriously the best fried chicken i have ever had in my life.  by that measurement, $4 is a small price to pay.

Grumman78 in the Faubourg

update! (2012/09/26): according to the Grumman78 Facebook page, the faubourg grumman has closed down due to the well-documented cockroach problem at the faubourg.  although i am sure that was a factor, i also can’t help to wonder whether their business was doing well.  as i question above, food court patrons are used to pay sub-$10 for a food court meal and grumman was asking for people to pay around $20-25.  so there may have been other factors.  a food court like the Carrefour industrielle Alliance one under Simons and Cinéma Banque Scotia might have been a better fit, as they already have restaurants like fiore and momoyama in there that offer more expensive (and quality-commensurate) options.  on the plus side, grumman have opened their st-henri headquarters as a regular restaurant venue on wed, thurs, and friday nights.

a spicy and sour mexican candy, very reminiscent of chinese sour plum candy.  pictured here in front of the decapitated birthday piñata from whence it was birthed.  apparently highly unpopular with damned fool drunken revellers but to be fair it is an unusual taste.  definitely don’t go in with typical sweet candy expectations because that’s not what this is all about.  the lollipop is covered with a sour chili powder, but the interior is a typical sweet lollipop type of hard candy. it works- the contrast between the sweet interior and the lingering sour chili taste exterior are definitely unique.  and as you make your way through the hard candy, having totally run out of chili powder, just as you’re getting sick of boring old lollipop flavour, wha-bam:

your piñata head may or may not suffer a similarly gradual rate of defenestration.

spied in a friend’s apartment:

the holy bible of jadistan?  perhaps.

thankfully, jadistan is not some kind of backwater banana republic and their bible is conveniently available online:

kinda makes me want to host a grilled cheese competition/pot luck.  and if it were somehow possible, use melt shop as the control or wild card or whathaveyou.  hmmmm.

i think the discovery of the vodka pickle goes back to early 2008, when my friend jeremy and i were out for “just one beer” and a “quiet night” over at cheval blanc, a fine local brewpub.  ok actually in fairness the quotes here are really unnecessary as the point really (honestly!) was to have just one or two beers then hit the hay.  so we went to cheval blanc, we sat at the bar, we ordered a beers, and we conversed.  then we watched in rapt attention as a waitress sliced open a pickle, prepared shots of vodka, placed said pickle slices in the vodka shots, gathered them on a tray and delivered them to a table.  rapt attention?  and utter bewilderment.

upon her return to the bar, i got the waitress’ attention and asked just what the fuck it was she just served to that table over there.  she smirked, shrugged, and offered “vodka pickle?”  so yeah of course we ordered a pair of shots.  and they were not the last.  if i recall correctly (and i can’t), i think the night ended in debauchery.

*1st runner-up for this article’s intro phrase: hide your kids, hide your wife, hide your husband, cuz they’re vodka picklin’ everybody out here.

TOTALLY GROSS AND TOTALLY AWESOME ALL AT THE SAME TIME

the monday following our previous week’s zeppole expedition i had a doctor’s appointment- nothing special, just a regular checkup.  long story short i discovered that the pre-screening nurse (i assume?  well health professional of some kind at least) is italian, and we ended up having a big zeppole conversation and i got the skinny on a few locations.  the first was a patisserie molisana on somerled in ndg.  the second was described to me as “you know that church on dante?  well, the folks go there for sunday services and then afterwards they head across the street for zeppole.”  okay, yes, this sounds exactly like what i am looking for.

these are the zeppoles you're looking for

the place is alati-caserta and they have quite a selection. 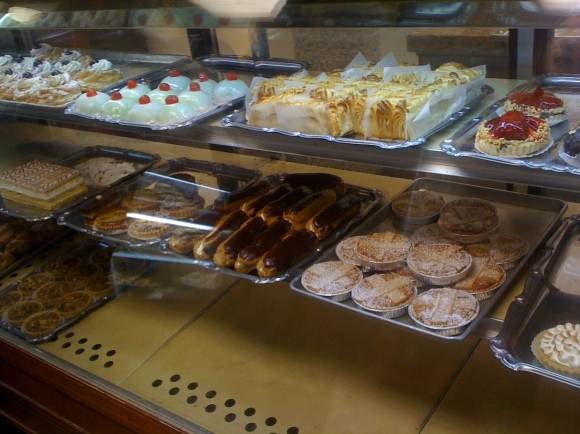 now i’m not normally much of a sweets person, but holy crap.

they had two kinds of zeppole, new-style and traditional.  new-style is deep-fried and filled with ricotta cream and adorned with a black cherry on top.  old-style is baked and filled with either custard or ricotta cream.  we opted for one of each, plus what i maturely dubbed “the green tit”, which was fluffy cake bread soaked in rum with a sugar glaze and cherry on top. 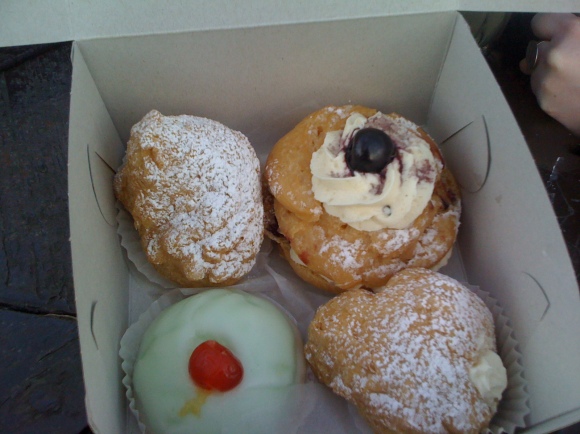 altogether too much desserts for two people

oh and obviously an almond paste lamb too, can’t let that one go unmolested. 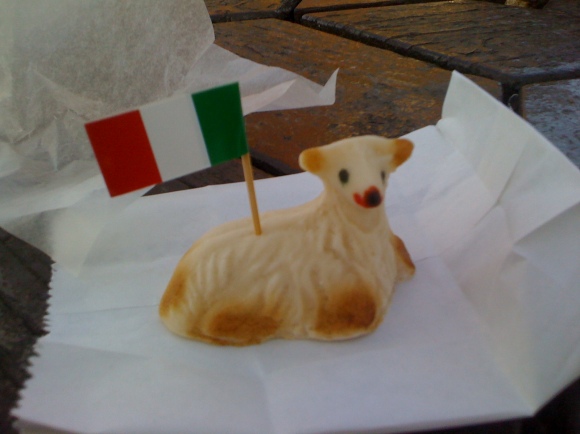 overall i preferred the new-style zeppole, with its reassuringly stocky and crunchy exterior.  the ricotta cream is definitely the way to go.  my fellow zeppolian bridget preferred the old-style.  neither of us were too crazy about the custard version.  it became harder and harder to objectively judge the other desserts as we had collapsed into diabetic shock by that point.